In all the centuries that human beings have told stories, there has been no more mystical and emotive medium than music. From the first tribal drums to the ancient flutes all the way to electric guitars and synthesizers, music has been a universal language, communicating emotion not through words or images, but with melodic and rhythmic sound. It’s capacity to elicit human response is boundless; it can render our hearts, fortify our spirits, relax our bodies or make us want to dance, sometimes all within a single piece. It can conjure images in our minds, take us to distant lands or confines right inside ourselves, and it can be argued that, though separated by culture and time, both classical music and rock music have this awesome power in more abundance than any other style or genre.

Classical music is, of course, the mother of the spectator musical performance. Long before the Rolling Stones or Led Zeppelin, the likes of Bartok, Mozart, Pachelbel and Beethoven were performing vibrant pieces to packed out venues and working their audiences into a period-appropriately refined emotional whirlwind. It was the ultimate form of music as communication, breaking the barriers of language, culture and, with the invention of the polygraph in the late 19th century, class. Speaking to us on an even plane, a sound which was built of pure emotion; clear, primal and unrestricted, in so rich and engaging a manner that it has fortified itself for hundreds of years within the global culture and secured it’s longevity; still today, there are few who can hear the works of the great composers and not be deeply moved.

It would be until the late 1940’s, and the advent of the mass-produced music industry, that Rock ‘n’ Roll would come to claim the mantle as the center of music in popular culture. Like classical, not everyone loves it as a genre, but everyone loves at least an example of it. Though rock has the distinction of words to accompany the music, it is seldom the words which strike our emotional chords when we hear it, but the pulsing, beating rhythms and melodies generated by a more working-class, stripped back, more primal version of storytelling through song. Though it utilizes contemporary technologies (which one imagines the likes of Tchaikovsky and his colleagues would be proud and enthralled by) it can be argued that rock music actually took music back to it’s original incarnation; a medium of communication open to the every person, accessible not only to listen to, but be played and tinkered with by all. It also withdrew the growing intellectual, upper-class stigma which came to plague and unfairly categorize classical music in it’s Autumn years. Music, again, was primal, simple and minimalist…although it’s hard to call the epic, arena-filling anthems such as Stairway To Heaven “minimal”, given it’s epic scope and sound, yet it is performed only by four men.

The stigma which divides the mediums perpetuates to this day; classical, for some reason, is looked up in retrograde as something distinguished to the economically, socially and intellectually privileged, while Rock is seen as dirty, simplistic and unintelligent. Sometimes the inverse, and fans of either still look upon each other with the tint of prejudice which hampered the breakthroughs of song over the centuries. Everything has been “Devil’s Music” at some stage. However, some have seen the parallels between the two; American rocks band KISS performed and entire concert backed by a symphonic orchestra, melding classical music with their pulsing rock beats. British rockers Led Zeppelin combined electric guitars and pound, rock drums with a string section in their monolithic hit “Kashmir”, while the Moody Blues wavered between rock and orchestral with “Knights in White Stain”. Australians Hunters ‘n’ Collectors, like many other rock bands, play their live gigs with a horn section.

It seems the divide exists only in our minds. 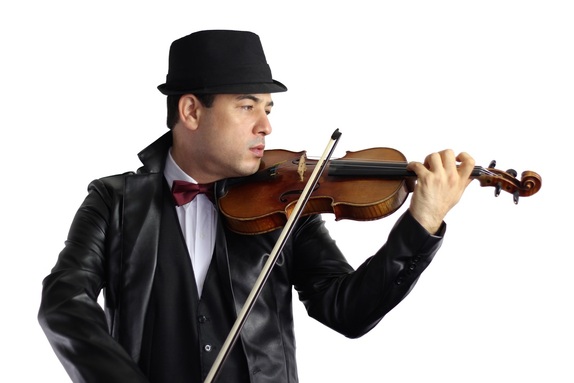 MD: Hi, Attilla, how are you feeling?

AS: Not too bad, thank you.
MD: Tell us about yourself?

AS: From as long as I can remember myself I have played music. My greatest reward is seeing my audience eyes filled up with joy.
I live to play and I play to live.
MD. About your music?

AS: My music is my life. It means everything to me. I play to a perfection. I speak with my music, I reach out to my audience of all ages, I have no barriers of language, I speak them all, and my audience speaks back to me...
MD: What inspired you to take up this genre?