Today we will introduce you to something absolutely unexpected, that will blow your mind away with style, new ideas and creativity...

Introduction. Dear Yena and David, thank you very much for your time. I open your website and I read: "Menswear Dog is a 3 year old shiba inu living in NYC with a panache for all things style. His interests include never washing his selvage denim, lurking around Soho for someone to notice his steez, and sniffing fine a$ bitches..."
Guys, Yena and David I do not know where to start from… When my daughter, Masha sent me your website link I could not stop laughing first, then I was curious, then pleasantly surprised with this gorgeous, original idea, admiring your talent and creativity… How? Why? It is so funny and soooo working well!

Q1. Did you guys both go to school to study styling, design and fashion?
Y&D: You guessed right- we're both creatives. David is a graphic designer and I am a fashion designer. We both studied design and worked in our respective fields for a few years before diving head first into Menswear Dog.

Q2. You started implementing your idea three years ago… How did you come up with such a marvelous plan?
Y&D: Our blog actually only around 6 months old. We were bored one weekend late January of this year and decided to take a photo of Bodhi (Menswear Dog's real name) wearing Dave's serious menswear. We posted it on our personal facebook as joke, and the response from our friends and family was overwhelming, so we spent the next day putting together the website. It wasn't so much a plan as it was a happy accident.

Q3. He is such a charming little gentleman… I mean Bodhi, a male dog… How would you describe Menswear Dog style?
Y&D: We're big fans of classic heritage menswear because they can exist in a man's wardrobe through fashion trends and phases. But we also highly encourage taking some risks- during the summer, we dabble in street wear as well. 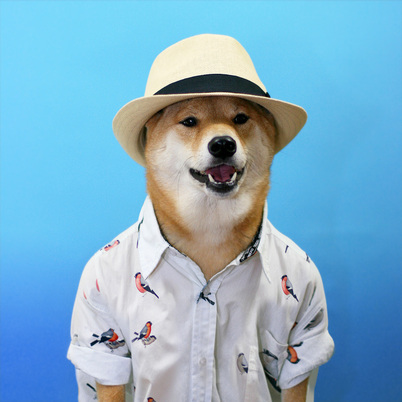 photos are copyrighted and published with Menswear Dog owners kind permission
To read more go to Yena and David's blog: http://mensweardog.tumblr.com/
Q4. What inspires you the most in life and in this work?
Y&D: To be honest, when you have a Shiba Inu this handsome living in your apartment, it's hard not to get inspired. Even in our busiest day, we'll find Bodhi doing something marvelous in the corner of our eyes and stop everything to play with him.

Q5. What is your favorite menswear dog outfit?
Y&D: We love him in this salmon linen jacket. He also happens to smiling the widest dog-smile of all time.

Q6. Is natural dog’s fur considered as dog’s underwear or just another layer of outfit that goes well with everything He wears on the top? (it is supposed to be a funny question… :) )
Y&D: We see dog fur is the same as human skin and by that theory, Menswear Dog must be a tan/ blond surfer just like his name. (He was named after Patrick Swayze in 90's cult classic film "Point Break")

To read more about Menswear Dog visit Yena and David's facebook page and like: https://www.facebook.com/themensweardog
Q7. How long does it take for you to finish one photo shoot with a setup to polish it to the perfection?
Y&D: It takes us a long time to first decide the outfit to photograph on Menswear Dog. It can take us a good hour to put together a look that we're happy with. After the studio is all set up to shoot, we put the clothes on him and from here, we shoot very fast so we get the best expression and to keep everyone happy and energetic. The styling and photo retouching can take an hour or two. All in all, I guess it takes around 3~4 hours to have everything complete.

Q8. I remember I had troubles to put our little Maltese female dog Penny inside the bag so we could go shopping with her – she just did not understand what was required from her and her legs were everywhere but not inside the bag….and forget about dressing her up – that would be a task for Hercules. Do you find it challenging sometimes to work with Bodhi? Is he reliable or he can afford to get late to work? Is he behaving well during the photo shoot?
Y&D:Clothes actually have a calming effect on Menswear Dog. Most people are surprised when they see him in real life because he's such a happy guy with or without clothes on. But besides being such a good sport, he also has a knack for expression. It's almost as if he understands what look we're going for and makes the perfect face to go with it.

Q9. You became quite famous and successful. Does your success help you or does success stands on the way of your creativity (especially when people like me keep asking you dumb questions)?
Y&D: We love the questions because they keep us thinking and also allows us to see what our viewers are thinking as well. We pursued this blog because it gave us the freedom to put out work that we love and we're so grateful for the support we've seen so far. The work that we do is extremely personal because we're a husband-wife-dog family team, and the blog represents things that we love collectively. That being said, this blog has definitely kept our creative juices flowing. 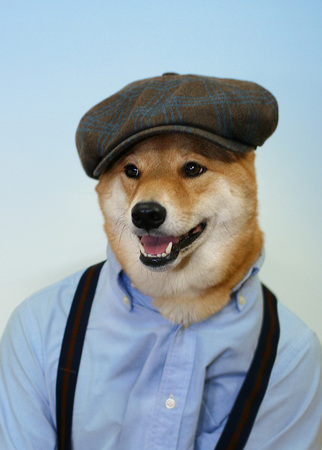 photos are copyrighted and published with Menswear Dog owners kind permission
To read more about Menswear Dog: The Photoblographer
Q10. What has been your most memorable time of creating one photo shoot? Do you remember any funny situations with your handsome Menswear Dog?
Y&D: There was one photo shoot where we got to see a glimpse of the "Menswear Dog Diva". I was in the process of setting up the lighting- I had Dave sit on the leather ottoman that Menswear Dog typically sits on to test the flash. Menswear Dog quickly realized that Dave was sitting in his spot and was being photographed instead of him, which he didn't like.
From hereon, Menswear Dog proceeded to photo-bomb every test photo I took in an attempt to sabotage this "new model" and after we finished testing the flash, and Dave got up from the ottoman, Menswear Dog jumped straight onto the ottoman and claimed his spot. He must have sat there for a half hour even after the photo shoot was over. He likes to prove that he's the top model of the house.

Q11. What will be your next inspirational idea, your next planned outfit? What He, Menswear Dog, Bodhi would like to try on next?
Y&D: We actually have an exciting collaboration coming up with legendary hat company Stetson.

Q12. You are such imaginative people. How did you two meet (if it is not a secret of course) and why do you like to work together on this project?
Y&D: We actually met in a photo class during college - it was one of those easy-A classes that kids took to fill their credits. Our work is always very collaborative and we're constantly asking each other for opinions because we know each others strengths.

Q15. If you had a choice would you choose to dress a kitty-cat instead?
Y&D: If we had a choice, we would still be dressing Menswear Dog. Clearly, he gets mad even if we use a test model, imagine what would happen if we brought a cat in. He'll probably fire us on the spot if that ever happened. 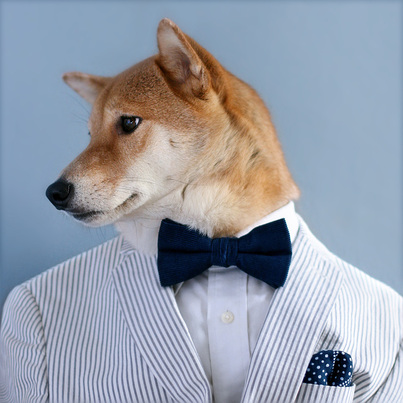 Q17. This is a very stupid question but I like asking it: what would be the first thing you do if you win a jack pot lottery or suddenly inherit a large sum of money, say like $$100 mln?
Y&D: Easy. Hire a financial consultant. Then adopt a million dogs.

Q18.If there was a nomination on sexiest Menswear Dog in the Universe do you think your lovely Menswear Dog would win  the first prize?
Y&D:Yes.

video by Mashable
Read more about Menswear Dog on Pedestrian TV
Q19. Boring question: what would you like to be doing in 2-3 years from now?
Y&D: We are actually coming out with a dog clothing line inspired by tailored menswear soon so hopefully that will be running full-force 2 years from now.