INTERVIEW WITH MAX DAVINE
ahead of his new book release MIGHTY MARY
website
We were lucky enough to interview famous Australian writer Max Davine
The interview took place ahead of his new volume release called Mighty Mary.
Max talked about the idea that was a fundamental thought for creating the book.
filming and editing: Anders McDonald
presenter: Susan Reynolds
ABOUT THE AUTHOR

Max Davine was born in a suburb of Frankston, Victoria in 1989.

He began writing dramatic pieces throughout high school, and upon graduating set off to Los Angeles to learn the art of writing and pitching screenplays.

Returning the same year, he went on to study acting with Peter Kalos at the Melbourne Actor's Lab from 2010 to 2012, the year his first novel, "Terra Domina", was published by ASJ Publishing. As well as novels, he has written for the stage and screen.
BTS photos: Natasha Marchev
ABOUT THE BOOK

Mary was a circus elephant. The Star of the West. She could dance, play the trumpet and pleased crowds wherever she went.

In 1916, after a disastrous Wild West show in Erwin Tennessee, acts against Mary the five-ton Indian elephant would go down in history as one of the most disturbing bizarre cases of animal cruelty the world has ever seen.

But, Mary had a life before the circus. She was free once. Part of a wild herd.

During the British Raj, she was captured, trained and sent to America to become a spectacle. Along the way, she loved, she lost, she made friends and formed bonds. She suffered heartache and experienced ecstasy. She was a living being.

​This is her story.
BUY THE BOOK 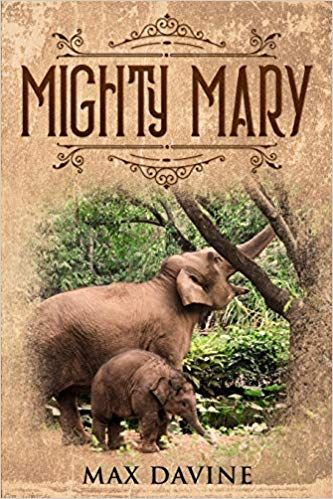 One of the most poignant and eloquent reads I have had in long time . The way in which the author has captured the voice and imagination of a baby elephant calf , and brought in to life in the human mind is absolutely amazing. I felt every emotion , every heart break and every triumph. Mighty Mary is a book that will stay with me forever. Thankyou Max Davine for giving one of our most beautiful and intelligent, yet most mistreated and disrespected wild animals, such a strong and powerful voice. Anyone who reads this book will never forget how it made them feel, or will they ever see an elephant through the same eyes
review of the book by Susan Reynolds

Max gives Mary a voice which resounds in your heart long after you've finished the story. Extremely poignant in our time where disregard for these beautiful creatures and the planet should jog us to think of our eventual demise along with theirs.

review on the book by Olga Tolkatcheva

Max Davine is a masterful storyteller; this book keeps you captivated until the heart-wrenching end.
This is the story of Mighty Mary, an elephant, who in infancy is ruthlessly taken from her world and raised in America to become one of the most celebrated circus performers.
This reminds me of Ernest Thompson Seton’s wildlife animal stories. We can look at the world through the animal’s eyes and understanding that they are not at all that different from us – they also have feelings and emotions, capable of complicated thought and reasoning. They are capable of imagination and love. But this is not a kids story, there are some very dark sides to it. The innocence of the animals makes people’s actions look even more monstrous.
From the first few pages, Mary gets our sympathy. There are wonderfully poignant words about Mary’s longing for her mother, her past life and her friends. It tugs at the heartstrings. Descriptions of nature and animals are full of poetic metaphors and similes. In contrast, the world of people is full of suffering, injustice, and cruelty. Even the ones who think to be kind are inadvertently cruel.
We get to know how Mary’s life changes and how she changes with it. It is a long way, and it doesn’t become easier for her.
We encounter many interesting characters. Mary formes an unusual connection with rebellious circus performer Christine. They have a deeper understanding of each other, sharing almost the same fate, trapped in the world they cannot control performing tricks to avoid pain.
But ultimately we are learning about ourselves, about the human world. There are some very astute observations, which will keep you thinking.
I truly enjoyed this book, even though I was often in tears. It is beautifully written and I highly recommend it.

Mighty Mary is the story of an amazing elephant. She was caught when she was young in India during British rule there. Mary ends up in circuses across America, after she has been trained to take part in acts. The novel is about her trek, and circus life, and that of others, human and animal kinds.

review on the book by Jeanette Russell

Max Davine, the author of this book, has written novels , and acted, as well as, writing and pitching screenplays. He is a multitalented man, and a gifted writer.
I really was thoroughly entertained by reading this novel. It was so skillfully and proficiently written, I felt. During the story I got so captivated by Mary herself, as well as, by her plight, and journey. The book had me very keen to discover more, about this elephants life.
Covered was cruelty that she had to endure at the hands of humans, which is something I feel so strongly about. Humans exploiting animals for their own entertainment and gain. Homo sapiens    also exploited each other, but could decide upon that for themselves, whether knowly, or maybe out of awareness. It seemed more unfair for the animals in the circus, who didn't get any choices really.
This tale kept me on an emotional ride as there were highs and lows in Mary's life. These facets included fun, joy, love, fear, devastation, famine, and extreme hardship and mistreatment, to name but a few experiences she endured. As well as Mary's account's, feelings and raw emotions, there were the human narratives. The book described saga's from several points of view, of the animal kingdom, and personal accounts of the characters ( human kind).  Finding it a fascinating read, there was certainly times of such sadness, in the story, and hardship that had me feeling so much for this precious elephant who seemed to have such difficult and very challenging trails. Thank you Max Davine for the amazing opportunity to read and review your latest book. Well worth the read, I say. Be prepared to have some heartwarming moments, and gut wrenching times, during, this "good read".
​
review on the book by Nadia Pleshkova

Mary by Max Davine (Goodreads Author) Read Max Davine is, no doubts, one of the finest Australian writers of today. His book “Mighty Mary” is powerfully written, mastering the words in such a way that a reader feels every sorrow, pain, joy, desire, struggle of at first a free and protected by her herd baby and soon an alert, observant, intuitive, grown into a 5 tonne elephant, called Mary. Based on the historical event of 1916, the story takes us through Mary’s experience of life and understanding the world with humans in it. She quickly learns that the instincts set out for things in the Wilde do not apply in the humans’ world. “The animals do not have a soul” was the standard belief of the people. This book makes us realise what a long way we, humans, evolved from the time of Mary’s living although still have to deal with the cruelty of a different kind in treating animals. Prepare to cry throughout the book. After reading “Mighty Mary” you would want to read more books by Max Davine.

​On Feb 16th, at Saint Charlie bar, in Brunswick, was an event hosted by Max
Davine, in the personable and welcoming atmosphere of the beer garden there. It was a delightful,  very pleasant and informative, evening occasion.This gathering was to launch  Max 's book  Mighty Mary, I had a lovely and most enjoyable evening.
We were privy to how Max came upon his inspiration to write the book. It was initially a photograph based on a true event that prompted Max to start the process of creating this amazing and sometimes daunting  story, of what Mary endured during her capture and circus journey.
It seems that Max has thought so deeply about the elephant's plight, and loving animals the cruelty that this magnificent creature, and many of her kind endure, during capture and circus life did not sit well at all with him.
This novel involves some true events, and also typical activities of the day entailing elephant capture, training, and often cruelty, it seems.
We had lovely weather and were treated to delicious and scrumptious canapes' during the event. Max was a charming, and very interesting presenter. Thank you very much, Max for a most amusing and congenial time.
I think this is a top class novel, very well written, and I highly recommend it.
Please read reviews about the book are available to read in Bohemian Rhapsody Club magazine.and Goodreads. 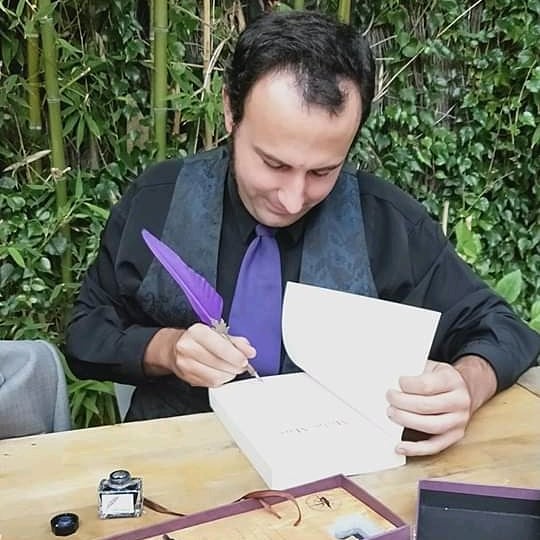 Bohemian Rhapsody Magazine expresses its special thanks to:

Max Davine for the opportunity to interview him and his precious time as well as to Ros, Susan, Olga, Nadia, Jeanette and Anders for their hard work   .
exclusively for Bohemian Rhapsody Club and Magazine ​​